This task is the final piece of the I2C driver uobject construction and will move the HMAC appending logic from i2c-bcm2708 low-level I2C driver into the i2c-ioaccess uobject. The following are the proposed sub-tasks (we will expand on the bullets as we proceed):

I think we can begin to make progress for task 3 by focusing on bcm2708_i2c_master_xfer within i2c-bcm2708 and checking to see if we have bi->nmsgs > 1 during our line-following. If so, this means multiple I2C transactions are present. In that case, let us see if all those transactions correspond to the same slave address (i.e, bi->msg[i].addr == PICAR_I2C_ADDRESS for i=0 to bi->nmsgs) and if they are only reads and the maximum value for bi->nmsgs during the line-following.

If for the entire line-following if the I2C messages we see are only for the PICAR_I2C_ADDRESS and just reads then I think we can just allocate a static shadow message buffer of size bi->nmsgs (obtained in the experiment above) and then use that instead of bi->msg[i]->buf within the stand-alone constructs in (3).

Let me know your thoughts and let us discusss details as we dive into this. I propose we aim to get (3) working within i2c-bcm2708 before moving onto (4) to move things into the micro-hypervisor/uobject. This will allow us to use printk within i2c-bcm2708 for debugging while experimenting.

i2c-bcm2708: refactor driver to use uobject for reads, writes and buffered read…s with HMAC

I updated the toolchains and now have an issue while building the hypervisor.
Reinstalled uberspark, but still see an error:

We do reads from the line sensor and writes to the actuators.

Hmmm, bi->nmsgs should be at least 1 to have a successful transaction within bcm2708_i2c_master_xfer. Are you printing the value right after line 471 as below?

Yes, I am aware that it sets it to 0, so had to print it at the right place instead and our messages are always 1:
bi->nmsgs: 1

and our messages are always 1:

If this is the case, then it simplifies our design and implementation. We can just have a single static shadow read buffer for the picar-s address (0x17) and just focus on the stand-alone construction for reads to 0x17 as mentioned in the OP (task-3).

I am trying to see what we need to do here.
The struct i2c_msg *msgs is passed to function bcm2708_i2c_master_xfer() and is expected to be populated with data from the read transaction.
The caller expects to have this buffer updated.
What is the proposed change?

What is the proposed change?

I did read it and this can be done of course as an interim step.
Do we need just a static global buffer in this file for this step?

Do we need just a static global buffer in this file for this step?

Yep, that is exactly what I am thinking.

ok, so I have an implementation which works with a static buffer.
Maybe the best thing is to check in the code in my fork. This is my origin: 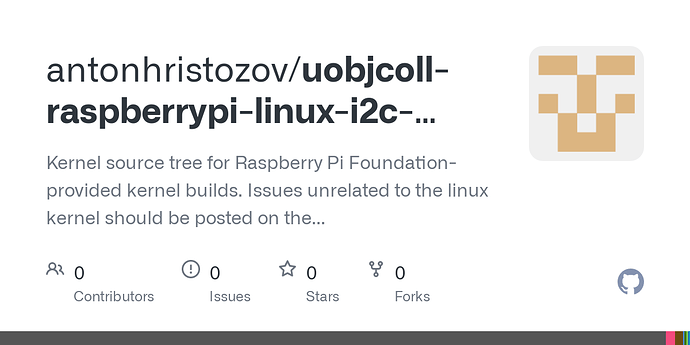 Kernel source tree for Raspberry Pi Foundation-provided kernel builds. Issues unrelated to the linux kernel should be posted on the community forum at https://www.raspberrypi.org/forum - antonhrist...

Ok, I think this is going in the right direction, but instead of setting msgs->buf to static_buffer as in line 465 below, the idea would be to use static_buffer directly whereever there is a reference to bi->msg->buf. There is currently only one such reference in bcm2708_bsc_fifo_drain for reads. So we could possibly check if its the line-follower address and use static_buffer there instead.

Then at the end of xfer control routine, copy this static buffer contents into msgs->buf.

This will help us isolate the places where we use static_buffer as a stand-alone fragment of code that we can then try to move into a uobject.

Hopefully that makes sense. Thanks!

No problem. I changed the implementation as suggested.
The important thing is that both implementation used the static buffer for the actual message processing throughout the call and both worked fine with the car and line following.
Code is checked in : branch uobjcoll-4.4.y in my fork.

Is there a way we can move the if(bi->msg->addr == PICAR_I2C_ADDRESS){ on line 213 outside of the while loop? i.e., first do the check and then carry out the while loop within that if block? I am guessing that would still preserve functionality.

If we can do this, then we can combine multiple reads within the same hypercall when we migrate to a uobject…

Yes, we can make this change. Let me try it and retest.